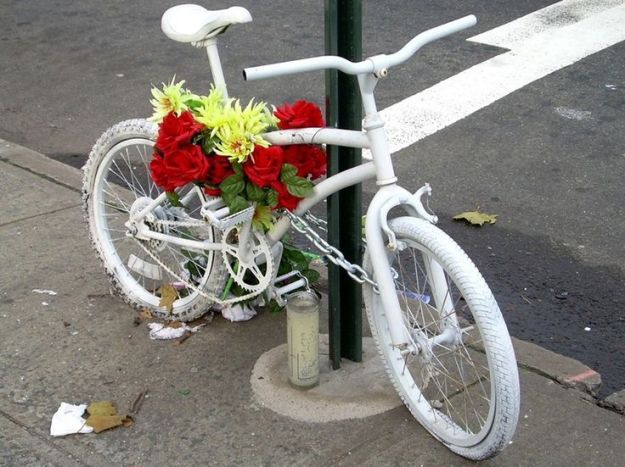 Yesterday I woke up, noticed the brilliant sunlight, and faced a day with no meetings or “events” to attend.  I had an errand to ride out to so it seemed like as good a day as any to take a little bike tour around Charlotte.  You won’t get a much better opportunity than a day like yesterday.  Spring has decided to creep gently into NC this year rather than the more normal way it enters, which is to burst in joyfully for one week and then leave us to “enjoy” an early, blazing summer.  I got my bike ready to go, filled my water bottle, and put on one of my favorite springtime outfits.  I said goodbye to my dog, locked the door behind me and headed down the hill.

At the bottom of the hill, I generally catch the sidewalk briefly to make use of the pedestrian crossing to the greenway.  It’s a good place to wait for an opening in traffic, and cross directly over onto the ramp that takes you to Sugar Creek.  It’s an interesting piece of infrastructure, that crosswalk.  You can push a button and get a blinking yellow, but the tiny computer guy in the light warns me that “traffic may not yield,” and for that reason, I know not to quite trust the beacon–also I was almost hit trying to cross as a pedestrian one day when all the cars stopped except for one.  It was one of those days when I could feel the wisp of the car as it flew by (speeding).  I had to pull my chest in and hold out my arms to balance myself.  Once I’d crossed and caught my breath I looked up and saw that car had slowed to a crawl.  The driver was going too fast and they saw me too late.  I’m sure he/she experienced some remorse at the close call they caused.

So I don’t push the button.  I wait for space, pull to the median, and then wait for space again if I need to.  That’s what I did yesterday.  I found a clear opening and I headed down to the dire blind corner of the Morehead underpass.  I was glad when I got down there that I’d done it slowly, because there was a mom, not quite in her lane, carting her child along on her bike.  She thanked me for slowing down to a crawl for her.  I continued along for a bit and eventually came to a group of older people (most of them weren’t wearing helmets) off of their bikes next to the East Blvd Bridge.  One older gentleman had obviously gone into the creek and was bleeding rather badly from his hand and knee.   I asked if they needed help and if they were okay, but bit my tongue at mentioning I’d feel better if everyone was wearing a helmet.

Yesterday I rode on greenway, on neighborhood streets and on a few four lane busy streets.  As I rode along I saw a lot.  I saw cyclists without helmets riding.  My pet peeve is when I see a cyclist parent not wearing a helmet while their cyclist child has one on.  You are saying to your child, “You can grow up and be like me.”  You are not getting across the message of helmet safety.  And while I hate those articles that always mention how the cyclist wasn’t wearing a helmet, as a cyclist who’s crashed, I do understand the value of my helmet that probably saved my life.

Yesterday I rode out to see my friend Christy at NoDa General Store.  We sat and discussed daughters and cycling and Bicycle Friday.  We chatted for over an hour before I hopped back on my bike and took the bike lane on 35th street, then dodged through the neighborhood to connect with Mattheson.  I was rolling up Mattheson in the middle of the right lane when someone passed too close.  I yelled because I realized the driver of the giant van didn’t seem to be really paying attention to what they were doing.  I passed through the intersection into the neighborhood and found my way home through Plaza Midwood.  A cyclist yelled my name and said hello on Mecklenburg Avenue.

Eventually I rolled through the Spoke Easy Parking lot where Dread said hi.  Then I crossed two busy streets (4th and 3rd) and made it back to my house.  At home I checked my phone and saw, very sadly, that I’d been tagged in a post about a woman dying on the booty loop in Charlotte yesterday, while riding her bicycle.  I watched a video and read two articles about the crash.  I was thankful the driver was actually charged with something.  I was thankful the driver hadn’t fled the scene (as often happens).  Still a cyclist died.  In January, three pedestrians were killed in a week in Charlotte.  Last month a high school student was killed on the way to her bus.  Last week a child was grazed by a driver who didn’t stop even though the bus stop sign was out and a child was crossing the street to board their bus and go to school.

Every time a cyclist dies on a Charlotte Street, the news crews come out and write or film the story.  The basic message is, “Tut Tut, cycling can be dangerous.”  Every time a pedestrian is killed, here come the news crews again, “Was the pedestrian in the correct place?  Did the pedestrian dart out too quickly?”  Did you know that some city planner changed the timing of the pedestrian lights in uptown…I assume it happened because of all the pedestrian deaths that happen there… so that the walk light turns before car traffic can go, which gives pedestrians that tiny space of a few seconds to be seen by cars?  We don’t as frequently say, ‘Tut Tut, walking is dangerous,” because we know eventually you have to park your car, get out and walk somewhere.

But walking in our city has become dangerous.  When a child can’t get to his school bus without the fear that a driver will come barreling through, his/her mind and eyes on anything but what he/she is doing…that’s dangerous.

Yesterday lots of women went on bike rides in Charlotte.  One of them followed me up Pecan with her terrible music blaring from her overly loud speaker, until I had to cut off and take a shortcut through the neighborhood to avoid it.

Yesterday Stacy Stranick went out to ride but didn’t make it home.  From all descriptions she was a kind and supportive human and cyclist.  The news found it important to note that she was wearing a helmet.  I find it important to note that she was a human being, part of a family, loved and respected.  “Stacy rode on a level few women or men achieve. She was always considerate of others, and an encourager. I saw her slow her pace many times to come along side another cyclist to encourage them. Her death is a true loss to our community, cycling and otherwise. I’m honored to have known Stacy, and when I could keep up with her, to have ridden with her.”–Scott Campbell